Global poverty can be measured in gallons

Global poverty can be measured in gallons. More than 20% of the world’s population – 1.4 billion people – lack safe drinking water. Every day, dirty water claims the lives of an estimated 4000 children and according to the World Health Organization, 3.4 million people die each year from water related diseases.

A report published recently in the medical journal The Lancet, stated that inadequate and unsafe water supplies take a greater human toll than war, terrorism and weapons of mass destruction combined.

Global population growth, together with increased demands on water from industry and agriculture is exacerbating the need for more water and cleaner water, putting a severe strain on the environment. Without commitment from wealthier nations, the lack of safe drinking water is going to continue to severely impact impoverished communities around the world.

Analysts say that eliminating disease and deaths from contaminated water would mean a huge increase in productivity and health gains, estimating that for every dollar spent, there would be an economic return of between $3 and $4.

The Ibrahim Foundation is committed to helping break this cycle of poverty and disease. Together with Purifi, the One Hundred Wells Campaign has been launched to meet what has been described as one of the great human development challenges of the 21st century.

Lack of access to clean water and proper sanitation is an issue like hunger that people in poverty tend to suffer in silence. The Ibrahim Foundation believes that in a world where the technology exists to address this, clean water should not be a privilege but a basic human right.

The campaign to finance the digging of one hundred wells in desperately needy communities will provide water security for sustainable village agriculture as well as clean water for drinking and for improved sanitation. The cost of drilling and establishing a well varies from region to region – the depth of the well and the quality of the water require different methods to secure the supply.

Costs vary considerably as many target areas are remote and drilling equipment and materials often have to be transported through difficult terrain and sometimes unstable regions.

As well as drilling and completing the structure of the wells, Purifi additionally provides a unique advanced drinking water purifier in the form of an affordable cost-effective disinfectant without side-effects or by-products, creating a short cut to clean water where the supply may have been contaminated.

Demand for this project has been influenced by the success of the Ibrahim Foundation and Purifi in establishing relief in disaster areas where clean drinking water has been an immediate necessity, such as after floods, typhoons and earthquakes.

With this experience, and a profound awareness of the immediacy of the humanitarian need for clean water, Purifi and the Ibrahim Foundation have established an endowment of one million euros to launch the next phase of operations, the One Hundred Wells Campaign.

Imagine that hundreds of millions of people in rural third world countries go through life without ever using a tap or faucet. Imagine being a woman in India or Africa having to walk at least six hours a day to a contaminated waterhole and back, carrying a typical container weighing 20 kilos. Then imagine that the UN will reach its goal of cutting in half the number of people without clean water and basic sanitation by 2015.

That leaves an unacceptable unmet need which the Hundred Wells Campaign will begin to address.

Mankind’s development has always been linked to the availability of a clean water source. It is time that the international community recognizes that the poorest and most marginalized people in the world should have access to this most basic of resources.

The Hundred Wells Campaign will help rural communities avoid pollution, use water more efficiently and improve local agriculture as well as putting an end to the tragic loss of life – mainly small children – through water borne diseases. The campaign will help to contribute toward poverty eradication and universal human development, while helping to conserve the earth’s vulnerable water resources for future generations. 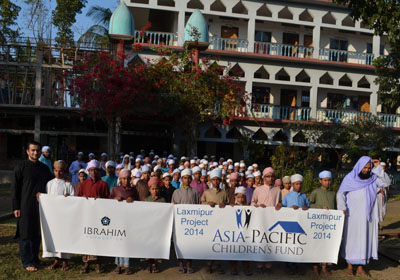